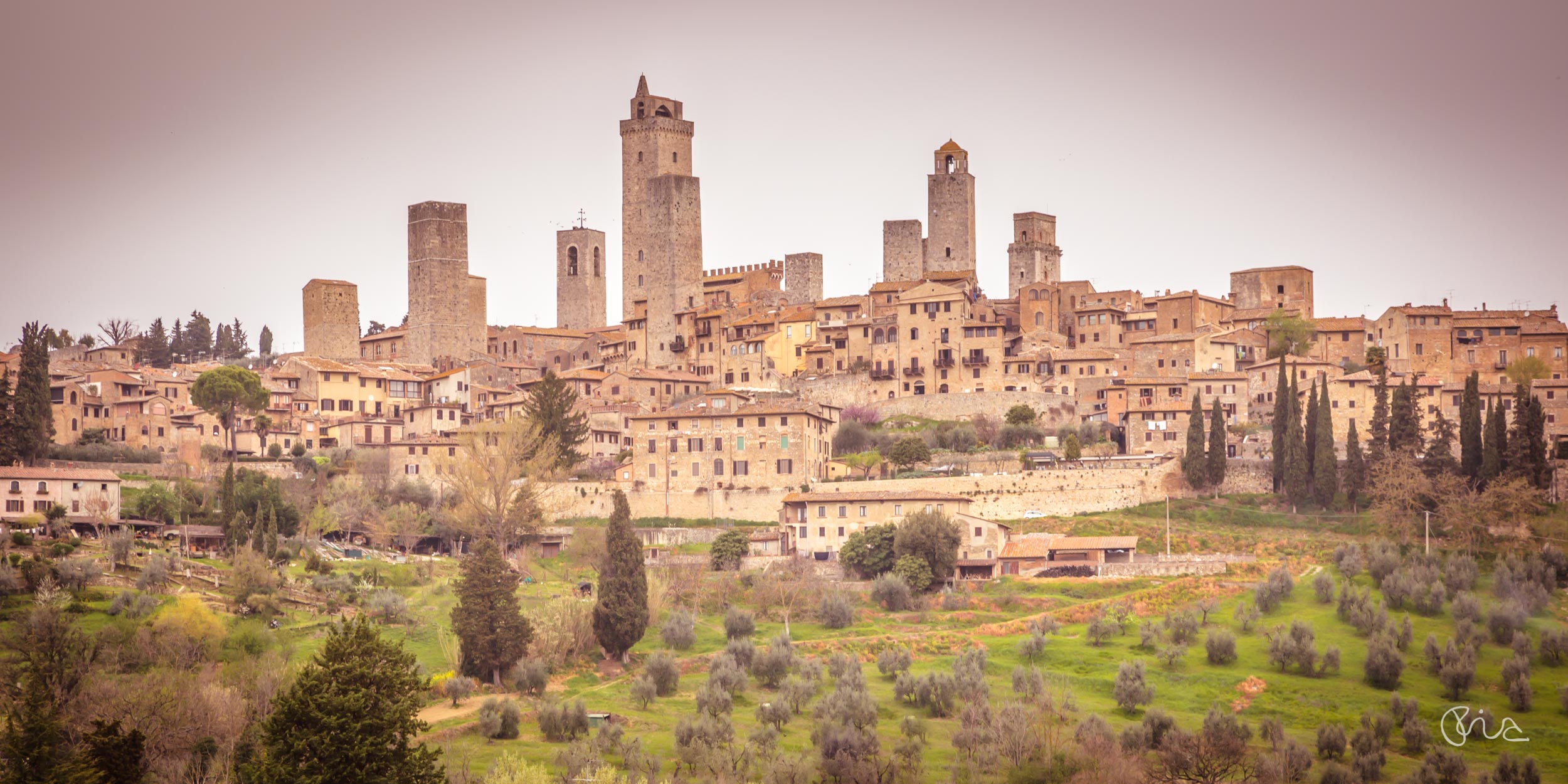 Fall in love with Tuscany, over and over again

It’s not hard to enjoy what Tuscany has to offer. A decent climate, good food and wine all set within beautiful scenery. I have been to Tuscany once previously and stayed at Castelnuovo di Garfagnana. It was a flying visit and made me want to explore the area further. 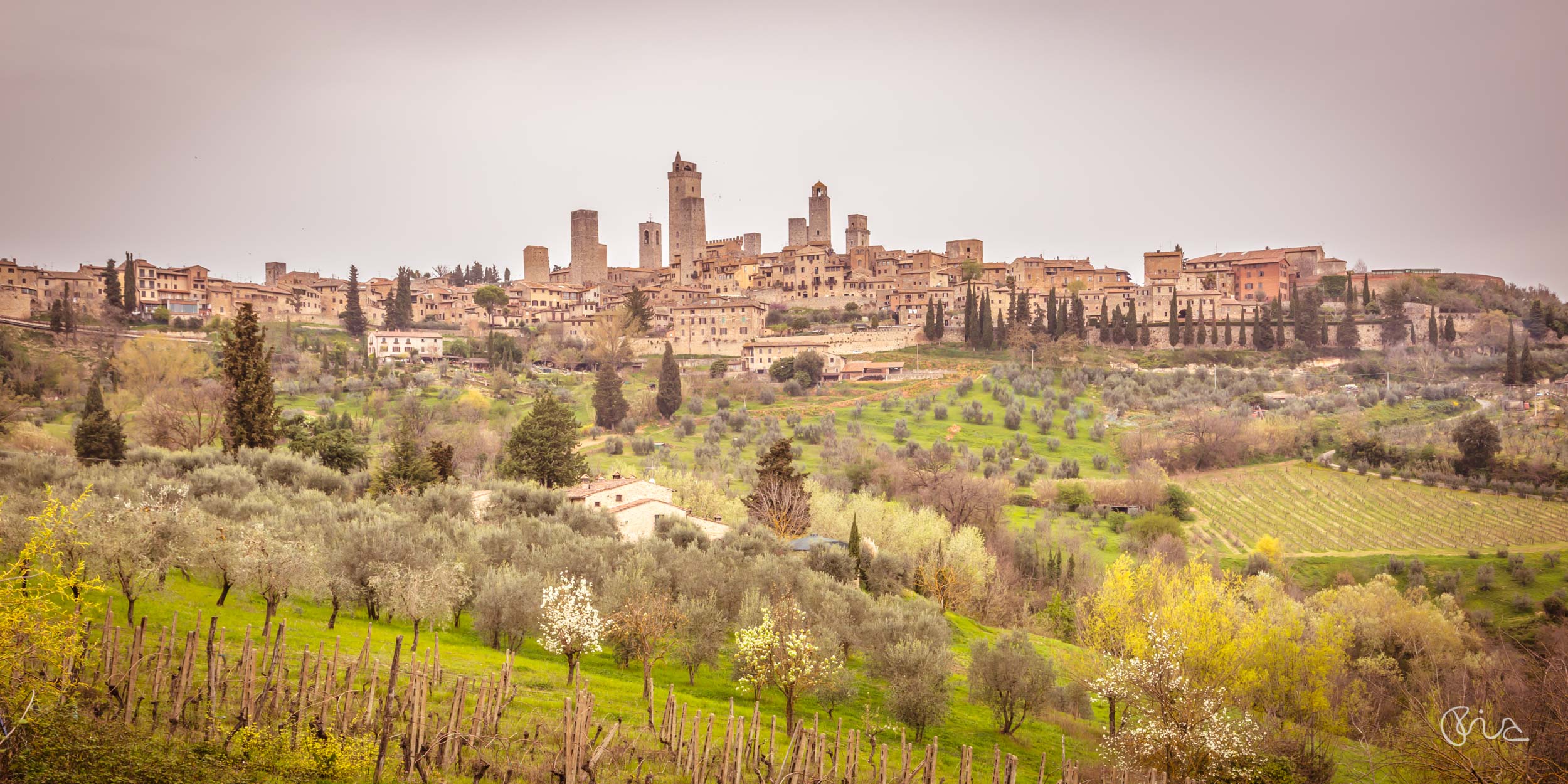 For this trip at the end of March 2016 we flew into Pisa, picked up the hire car and made the short drive to the coastal town of Viareggio and stayed at the hotel Principe di Piemonte. With a population of more than 64,000, Viareggio is the second largest city within the province of Lucca, after Lucca city itself. It’s a busy holiday destination, popular with Italians, and stretched along the promenade it has all the designer shops you would expect to find in a prosperous Italian town. 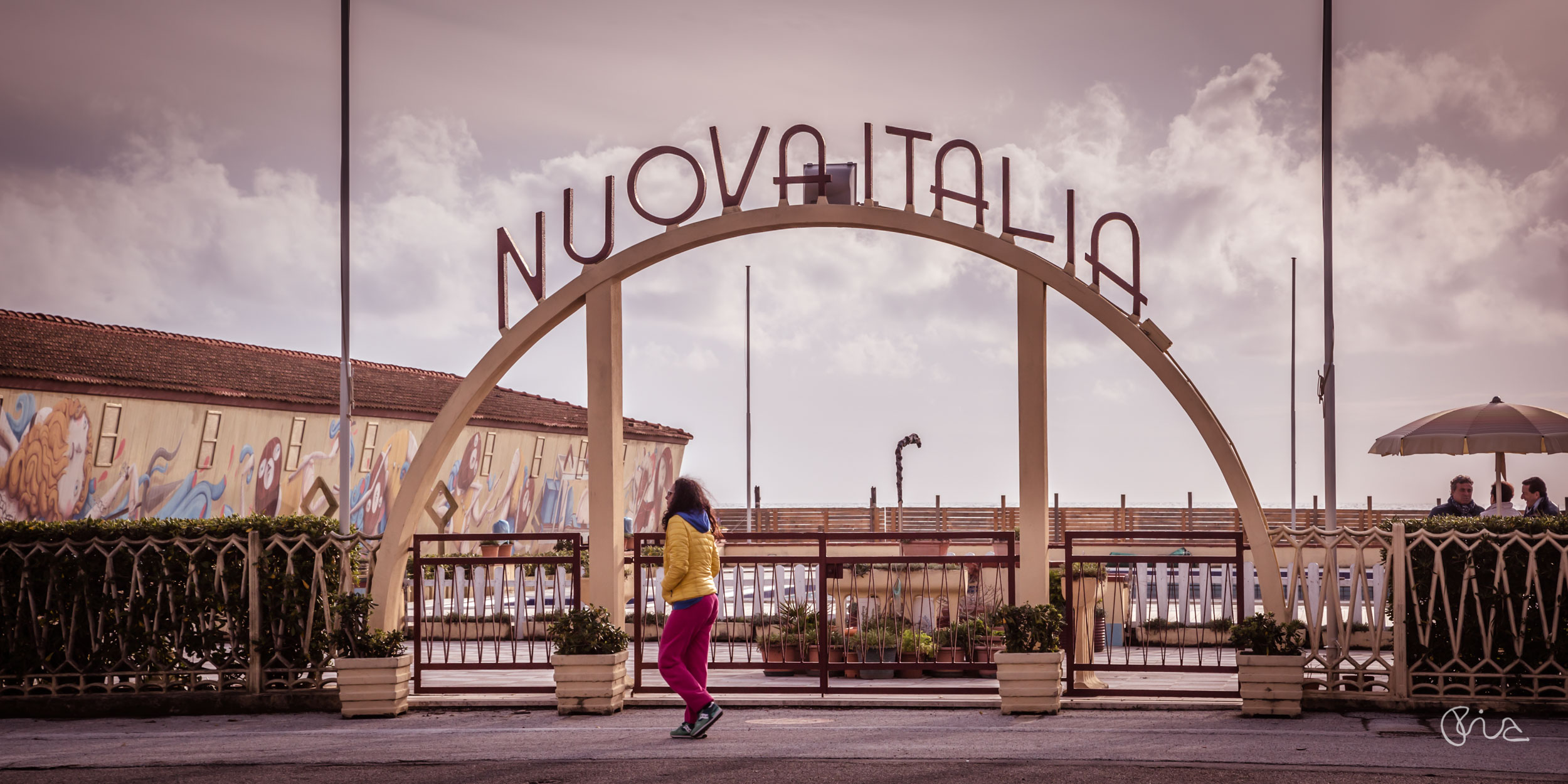 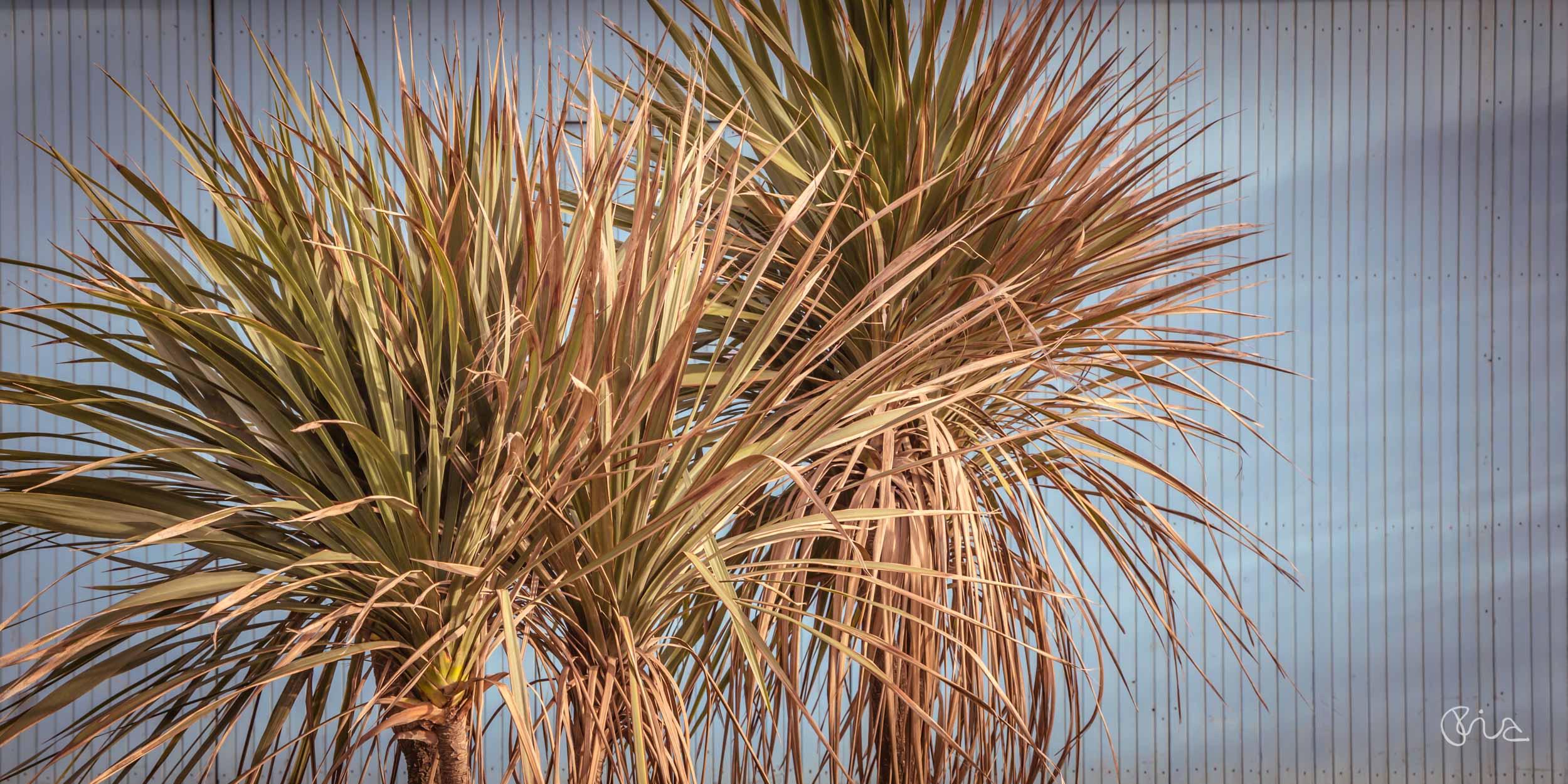 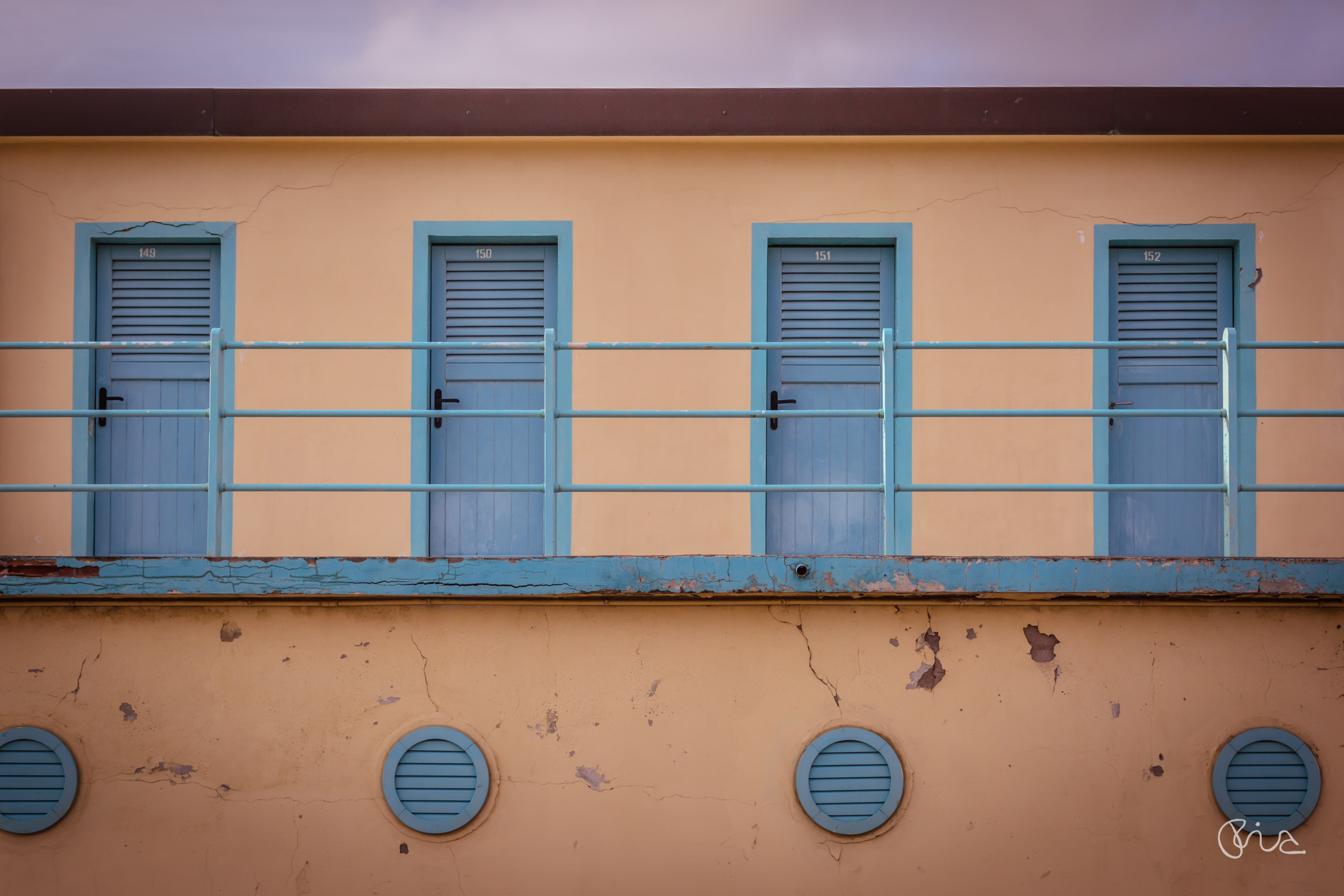 The four star hotel is set on the seafront and has views of the Tyrrhenian Sea. It was built in the early 1920s and is a member of the Small Luxury Hotels of the World and is a beauty to look at. It was restored in 2004 and the impressive corner stone facade catches the eye from promenade. Inside the reception is grand and traditional, the hallways are wide and the rooms are classic, spacious with high ceilings and Italian marble bathrooms. 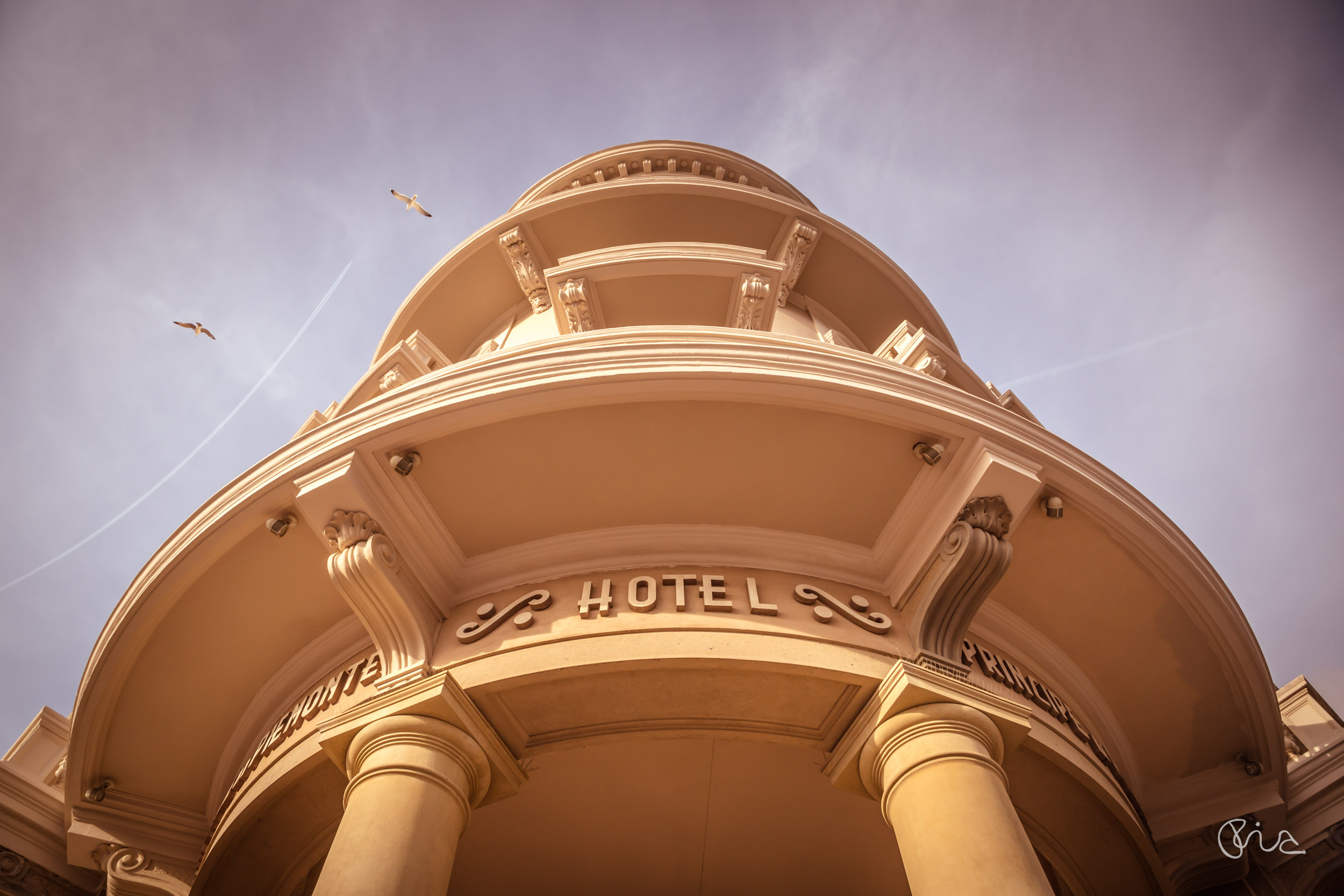 The rooftop swimming pool is heated and has views of the sea and surrounding hills while the Michelin-starred restaurant, the Piccolo Principe, serves Tuscan food within the roof garden. We visited during the off-season when the restaurant was closed but just a five minute walk away from the seafront is the La Cassina restaurant on Via Marco Polo. The restaurant was recommended by an Italian couple we bumped into and it didn’t disappoint. There was a queue outside as we arrived for 7pm and it was soon easy to see why locals and tourists enjoy this place. The fresh seafood dishes were plentiful and excellent – especially the stuffed mussels – the wine and service were great and it all came to less than 50Euros for two people. 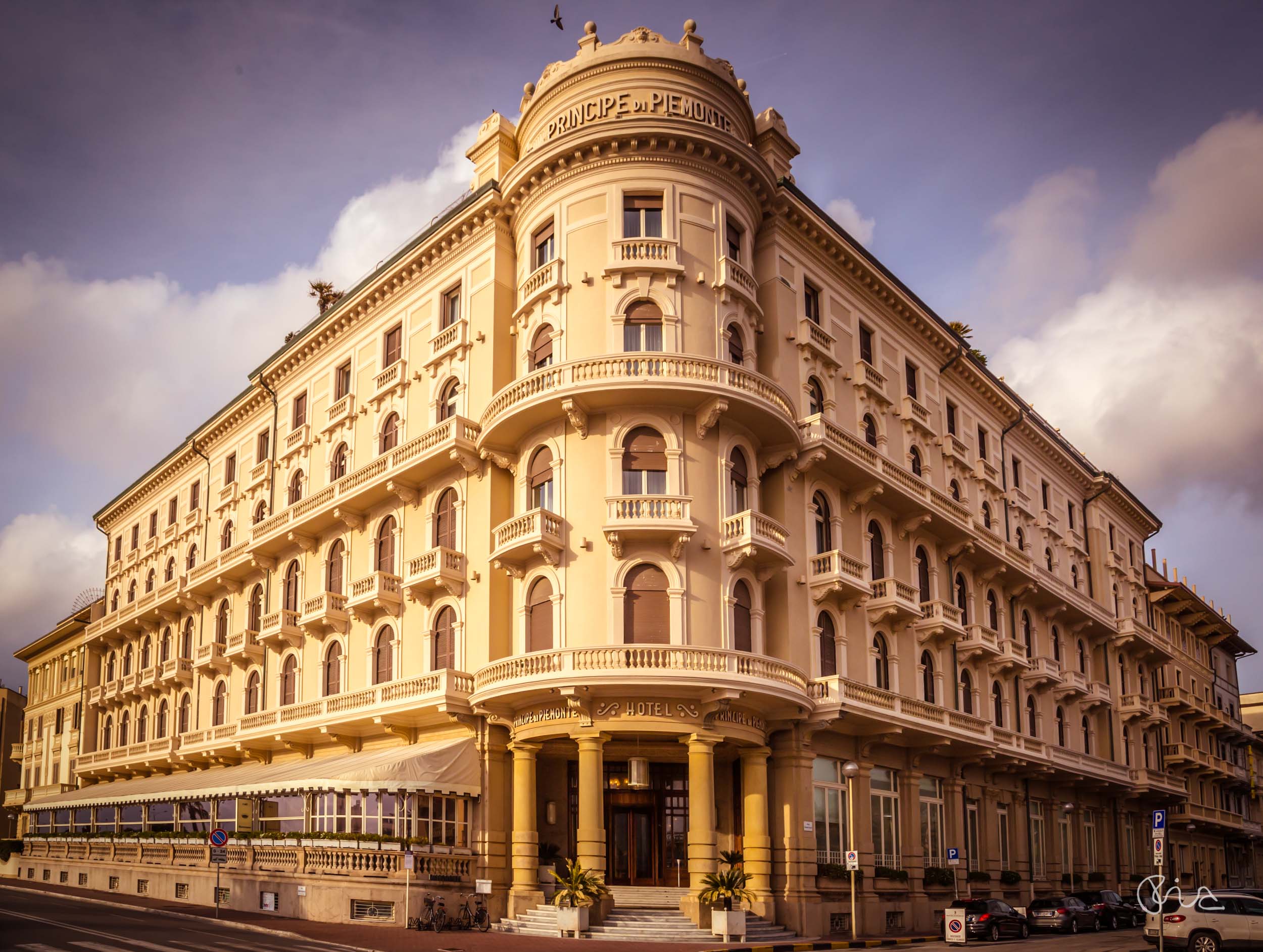 After a good nights sleep and a decent breakfast we headed for the E80 towards Pisa. The Piazza del Duomo, is a walled area within Pisa, owned by the catholic church. The square is dominated by four great religious buildings: the Pisa Cathedral, the Pisa Baptistry, the Campanile (the Bell Tower), and the Camposanto Monumentale (Monumental Cemetery). Regardless how many times you see images of the tower in magazines or on TV, it’s quite the shock when you see it close-up and witness the extent of the lean. 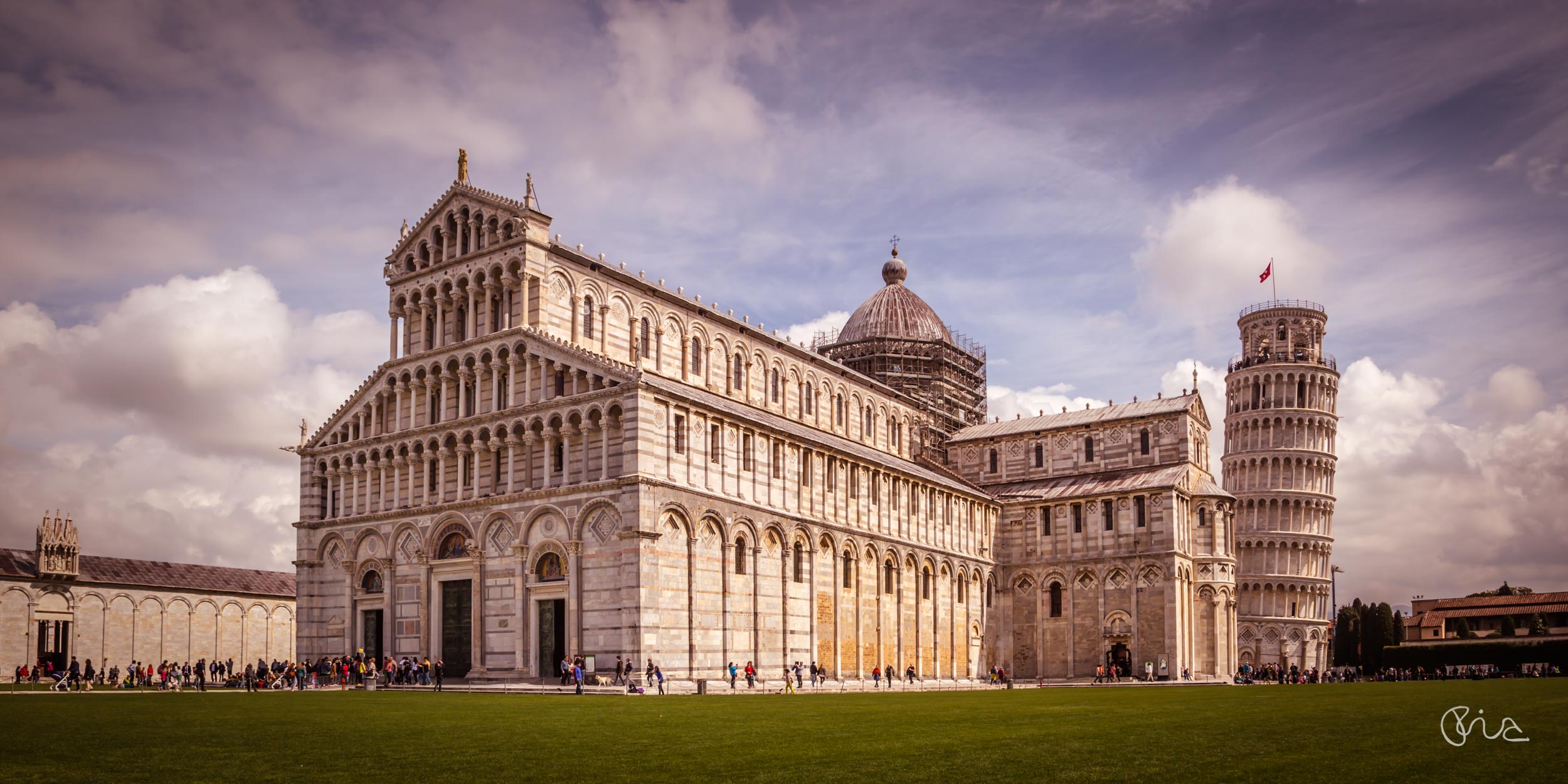 The 185-foot high structure tilts at 3.9 degrees, which means the top of the tower is displaced horizontally by 12ft 10″ from the centre. Often over-looked because of the tower, the cathedral, with its marble facade and Moorish mosaics, is said to be one of the finest examples of Romanesque architecture. The whole square was declared a UNESCO World Heritage Site back in 1987. Not surprisingly, The Piazza del Duomo is one of the most famous tourist attractions in the world and no matter what time of year, do expect it to be busy as tourists from all over the globe joust with their selfie sticks for prime position. However, there are many side streets where you can find a quiet spot and enjoy the surrounding areas of Pisa, which away from the tower are well worth exploring.

From here we took the back roads to a town called Monsummano Terme and stayed at the Grotta Giusti Resort Golf & Spa. The resort is quite unique as it’s connected to natural hot springs. It is built above a deep underground lake that rises to the surface with thermal waters. 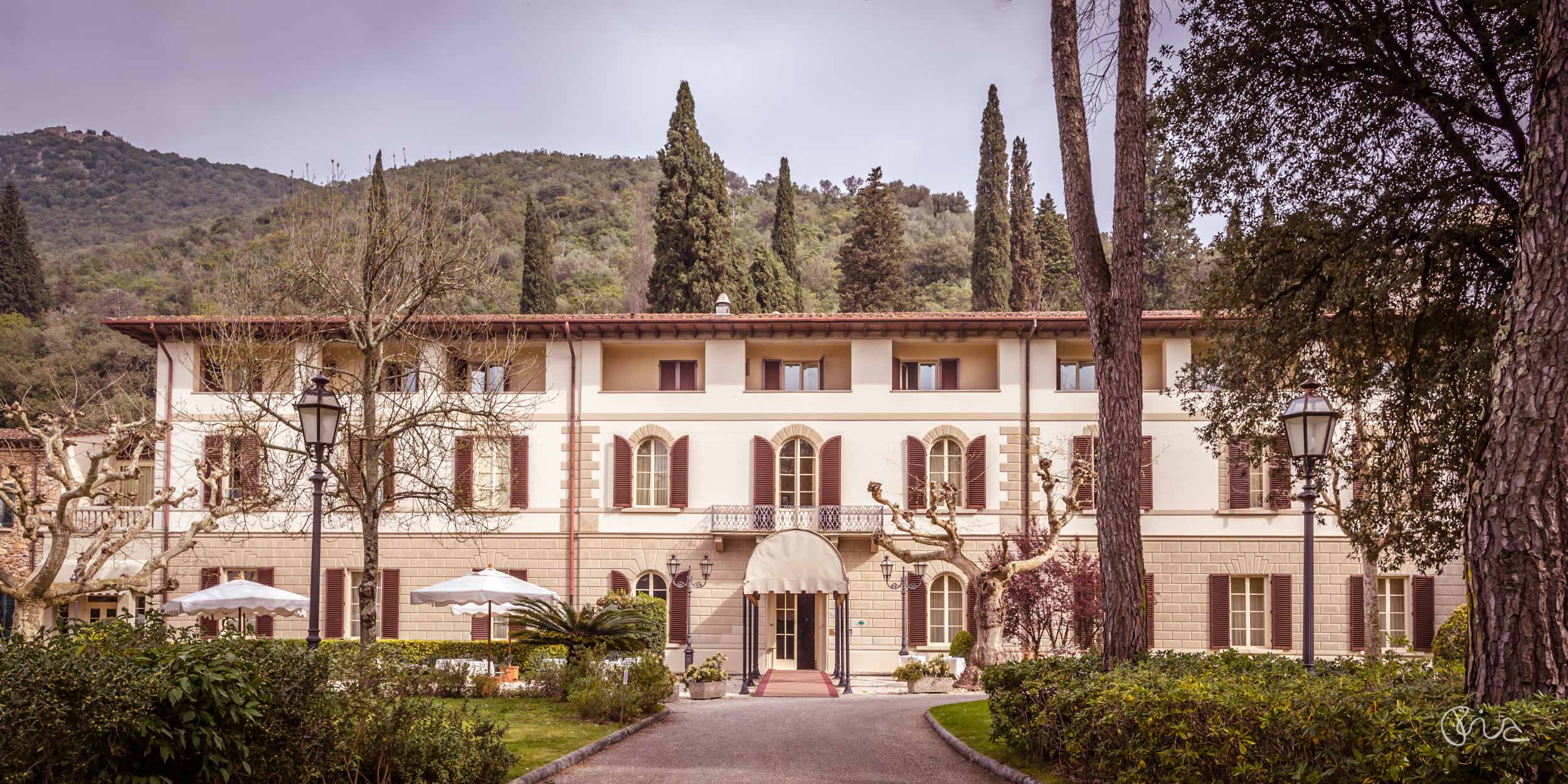 The thermal caves are the largest in Europe and extend more than two hundred meters below. The caves are divided into three areas Heaven, Purgatory and Hell and you experience temperatures from 28° to 34° C with natural steam said to have therapeutic properties. The stalactite and stalagmite formations are quite incredible and there are cavernous areas where you can sit, relax and breathe in the goodness – It’s a rare experience not be missed! The large outdoor thermal pool area has natural jacuzzis and the warm waters were great to relax in after long hikes in the nearby Tuscan hills. 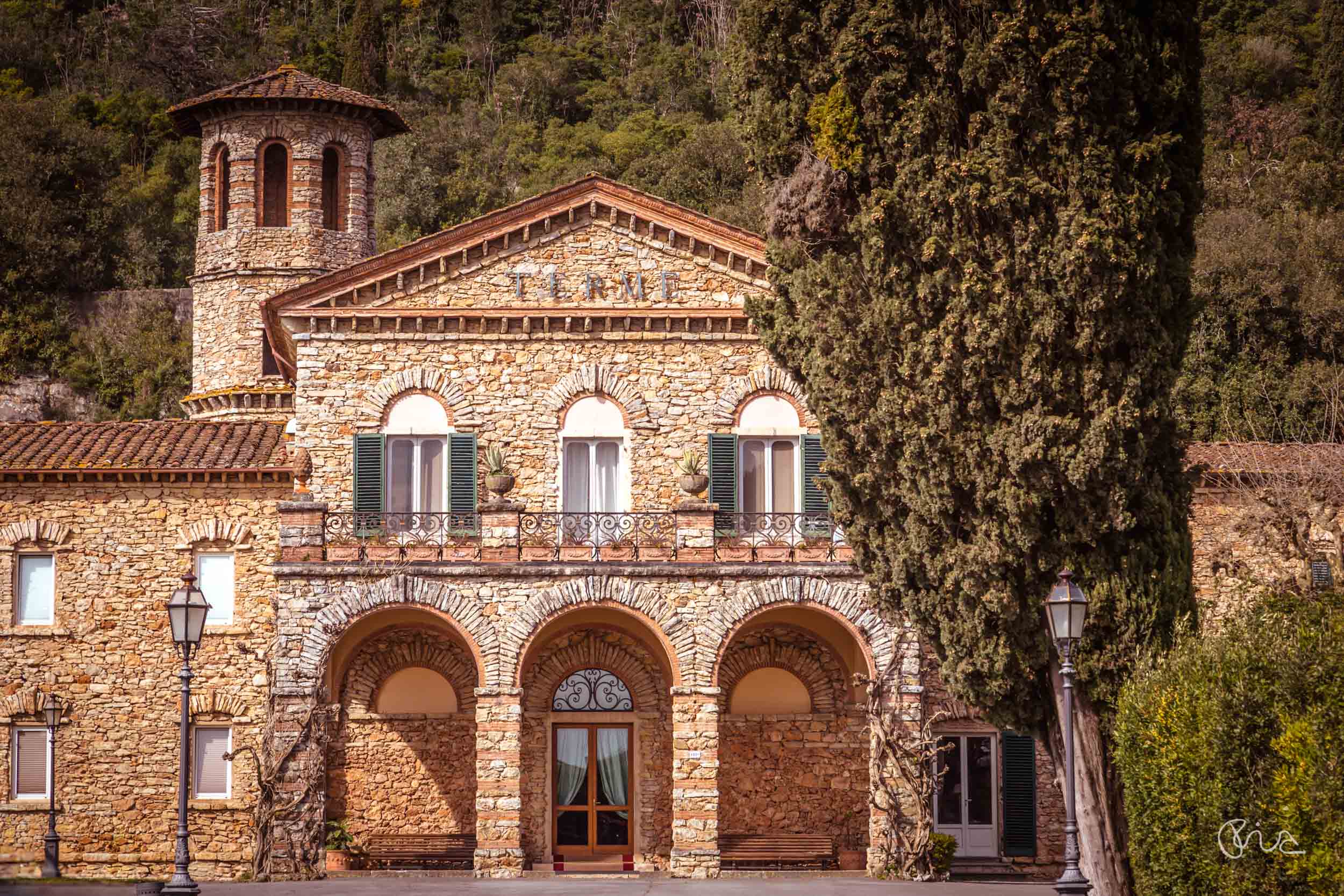 The hotel is divided between a modern wing and the original 19th century villa. The rooms and suites are comfortable and the bathrooms, furnished with Italian Carrara marble, provide natural thermal waters. The staff were extremely helpful and friendly while the La Veranda Restaurant was exceptional. The ingredients are fresh, healthy, locally sourced and skillfully presented by the chef. The sword fish steak (not sure how local the sword fish was) on pesto buckwheat certainly sticks in the memory bank.

Beautiful hilltop towns such as Montecatini Alto, Vinci, Sam Miniato are all close to Monsummano Terme and driving to and from these, stopping for some lunch along the way and exploring the small streets is a nice way to spend a day in Tuscany.

Siena, a city in central Tuscany, is a slightly longer drive and is about two hours south from Grotta Giusti. The first stop in Siena was the La Taverna di San Giuseppe, a restaurant in the heart of Siena just 300 metres from Piazza del Campo. It’s easy to say at the time ‘This is the best restaurant I’ve been to.’ but looking back I’m still struggling to remember where I have enjoyed a meal quite this much – particuarly if good steak and red wine is your favourite combination. I had the bistecca alla fiorentina, a thick, succulent steak prepared from locally sourced beef and the wine, recommended by the excellent staff, was a 2010 San Polo Brunello Di Montalcino – I will be back! 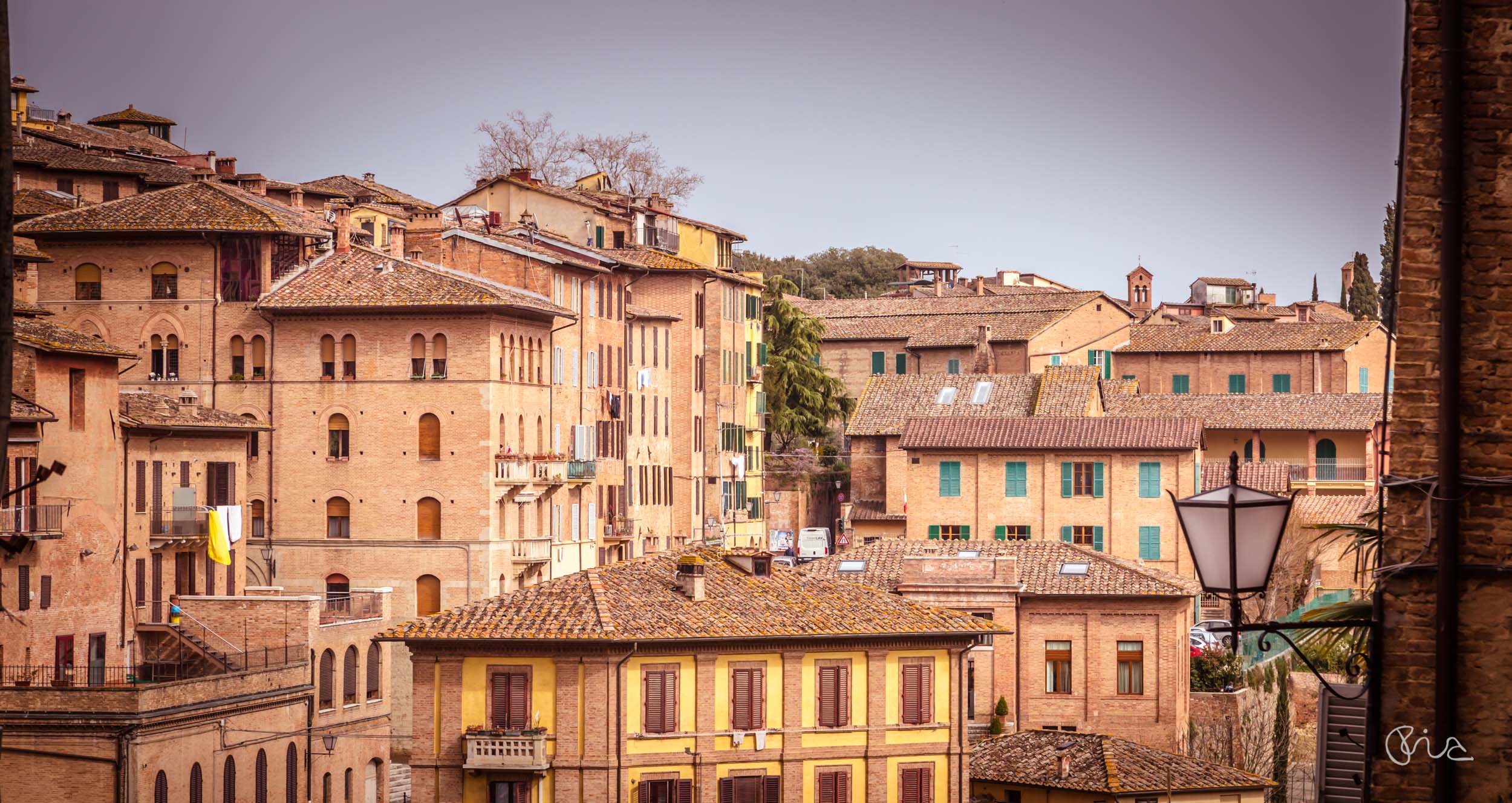 Siena is Tuscany’s second city to Florence and takes some beating. The Campo, its central piazza, is one of Europe’s most stunning medieval squares and one that hosts the Palio horse race, Italy’s dramatic historical spectacle. It’s cathedral is said to be central Italy’s most beautiful and to see the artworks in the many churches, galleries and museums would take weeks. Siena is popular with tourists but not as busy as Florence. March or April were the perfect time to visit the city and indeed Tuscany itself.

To read more of our travel writing, please visit