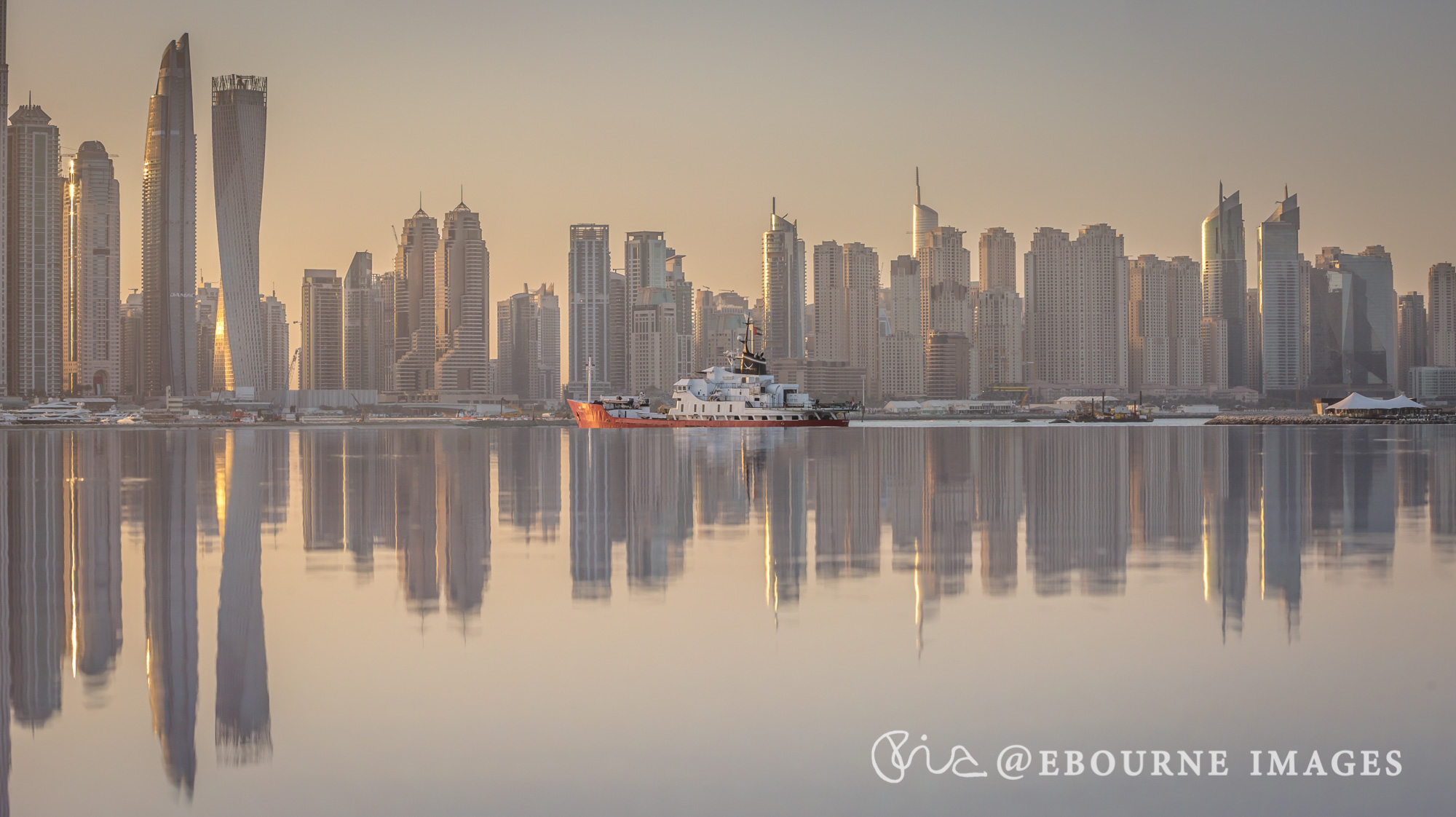 I wonder what the original owner of Dukes Hotel London would have made of their hotel’s new sister property, the sparkling, fresh out of the wrapper Dukes Dubai? 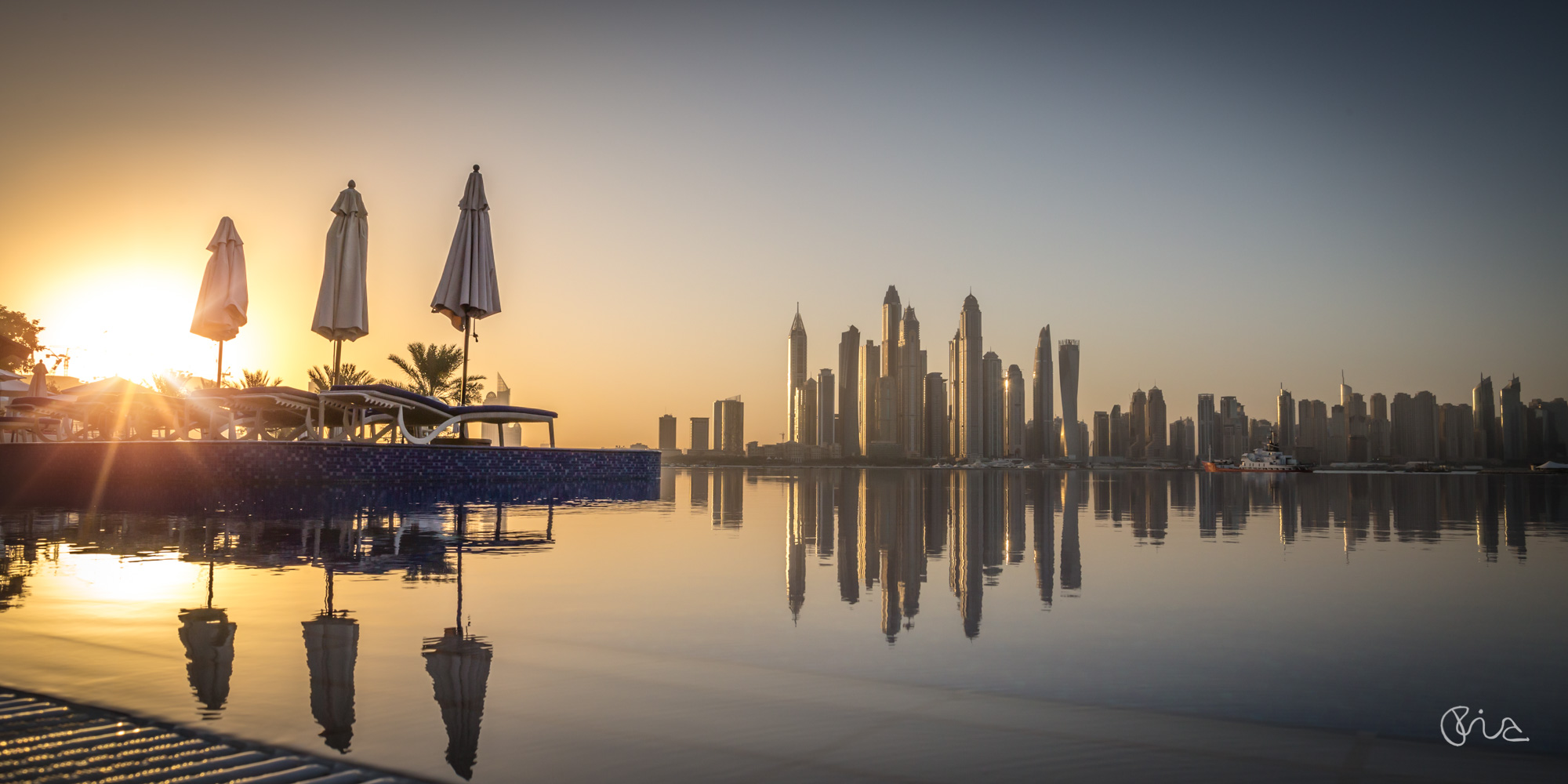 Imagine saying back in 1908, on the old cobbled streets of London in a secluded cul-de-sac just off Green Park, that a gleaming five-star hotel bearing the same name would stand 17 storeys high. Not only that, the two towers, connected by a 14th floor skybridge, would be constructed on man-made land shaped like a palm tree just off the coastline of the Arabian desert. More than a century later, it still boggles the mind but such has been the rapid recent development of Dubai – where buildings pierce the sky at almost 3,000 feet and you can ski within shopping malls that measure 12 million square feet – most things are possible. 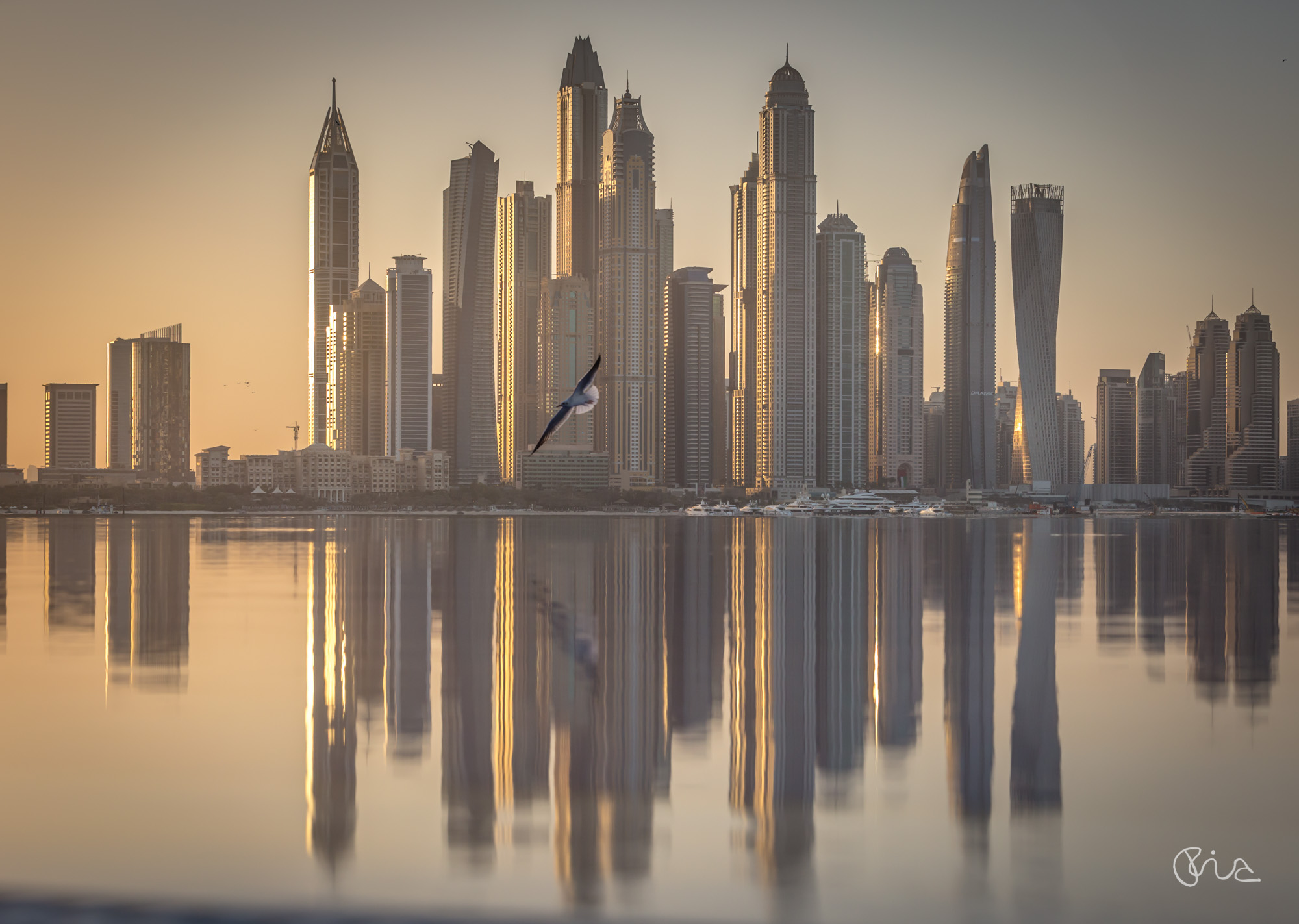 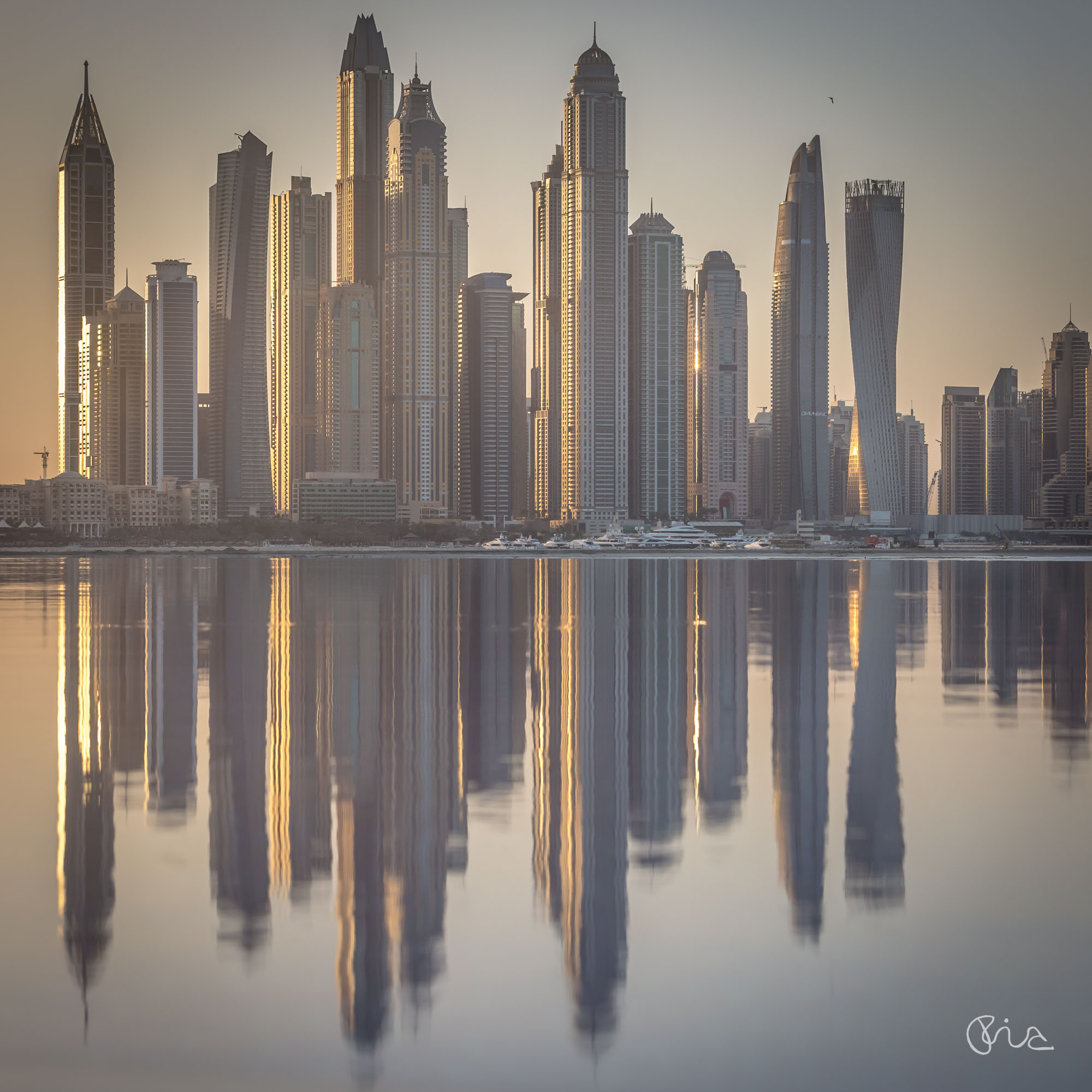 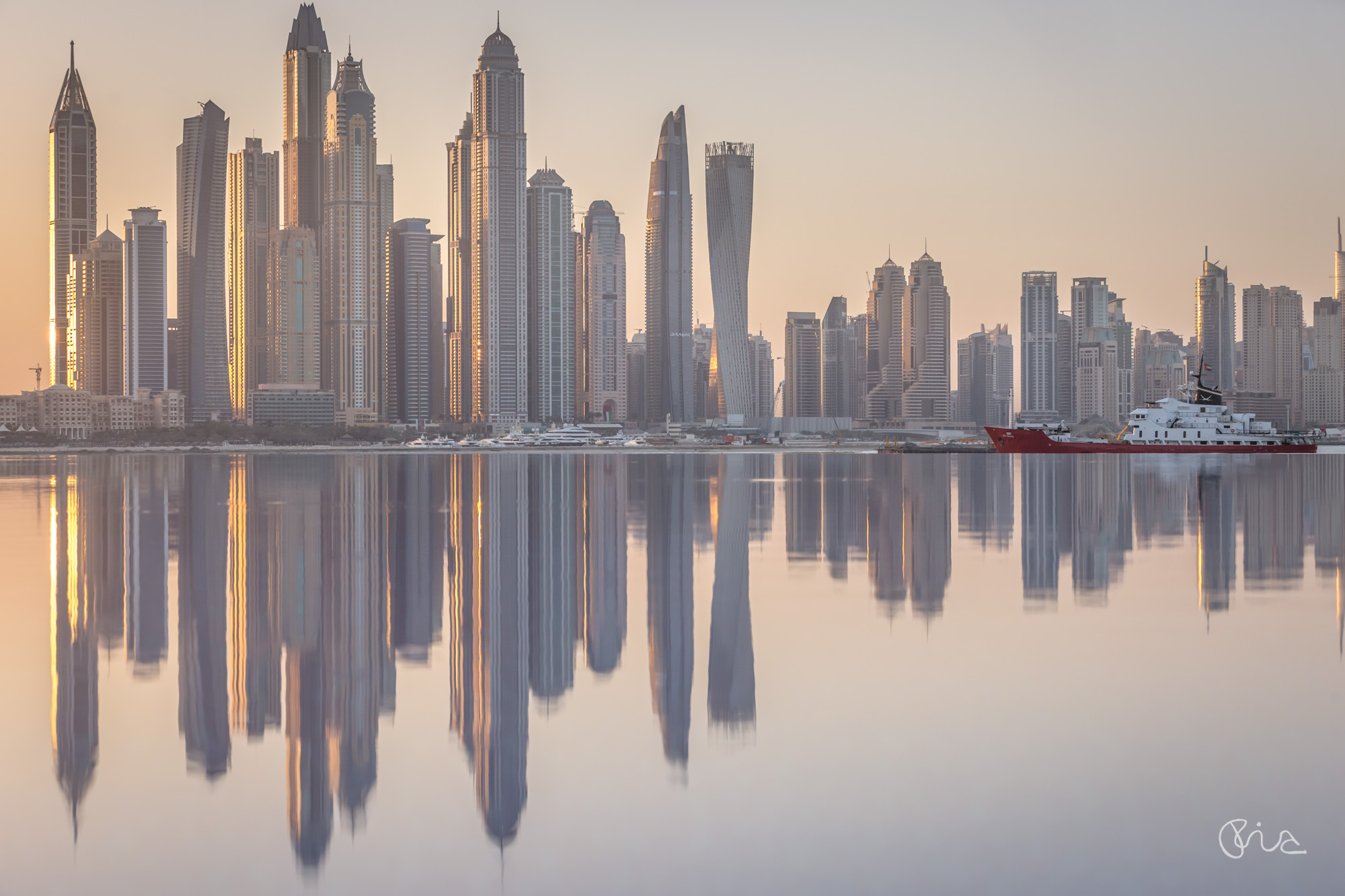 Palm Jumeirah may seem the total opposite of old style London charm but by Dubai standards, Dukes Dubai is understated and it’s a very classy addition to the abundance and ever- increasing number of five-star properties. They opened their doors to the public in April and have successfully delivered an elegant British feel and old-fashioned glamour to the Emirates. Well located on the west side of the trunk on the Palm, the hotel is part of a Seven Tides development that also includes a residential complex.

In search of guaranteed winter sun, we took the train from Eastbourne to Gatwick and boarded the ultra-modern A380 to Dubai International. Flight time was a little more than six-and- a-half hours – which for me equated to a movie, a helping of aeroplane food, a large brandy, another movie, a walk and a stretch, a third movie and then touchdown. Dubai airport was a speedy and painless experience and the transfer saw us arrive at Dukes Dubai within 30 minutes. We were politely greeted and taken to the reception, complete with marble floors and a Swarovski chandelier. Chesterfield sofas, paintings and classic literature provided that English touch and the feel of an exclusive retreat from the desert city heat.

Like its sister in London, Dukes Dubai prides itself on service. The front desk team were immaculate and gave a fine first impression. The hotel is currently spread over 15 floors, with two more levels being added on top. Building work is ongoing at the top of the hotel and also nearby but didn’t prove disruptive. The 215 rooms and 64 suites are set within one tower and 227 studio and one-bed apartments (ideal for longer stays) are in the second. Both have use of hotel facilities including the gym and indoor pool on the 14th floor. Some may find the rooms a touch small by five-star standards in Dubai but they were stylish and modern.

Our balcony, on the ninth-floor, faced the Marina skyline while inside the dark wood desks, the headboards and framed prints of London landmarks once again gave that British feel. The walk-in rain shower in the bathroom was also a nice addition. The British influence extends with amenities and candles supplied by Floris London, fabrics from British textile designer Liberty Fabrics, furniture by Andrew Martin, the bone china is William Edwards and London’s oldest cheesemongers, Paxton and Whitfield send the cheese.

Dukes Bar is just above reception and bar tenders have been schooled by Alessandro Palazzi, Dukes London’s famous head bartender, to pour the perfect cocktail – especially the Martini. After-all, it is said that James Bond creator Ian Fleming first thought of 007’s “shaken not stirred” line while drinking in the original London bar. The dimly lit and leather furnished cigar and whiskey bar is next to a funky champagne and tea lounge on the ninth floor. Something I’d never seen before, the knowledgeable bartender smoked my whiskey using a smoking machine and tobacco from fine Cuban cigars. It infused the drink with a tobacco flavour that mellowed as you drank it and although I had a throat like sand paper for three days after, I was happy for the experience.

Executive head chef Martin Cahill and his team ensured a choice of quality dishes with a British influence at GBR, the hotel’s signature restaurant. You can order classic British food with a modern twist from the menu or select from the buffet. The high ceilings and large windows provide grandeur and a nice setting for dinner and also the excellent breakfast buffet. As a fan of spice, The Kyber restaurant on the 14th floor, with views of the Palm and the Marina became an instant favourite – particularly the mixed seafood dish expertly spiced and flavoured by head chef Faizan Ali. The Kyber is a famous restaurant in Mumbai. This is their first venture away from the sub- continent and they bring a powerful taste of North India to the UAE. “The restaurant focuses on authentic North Indian cuisine,” Ali said. “It can be easily described as Ambrosia – the food of the Gods.” I didn’t disagree.

The main reason for the trip however, was winter sun and the private beach and pool area, for us, worked perfectly. The temperature throughout the week was a steady 28 degrees and the infinity pool, the largest on the Palm, has quite spectacular views of the Marina. Before breakfast it’s possible to enjoy the pool to yourself, swim your lengths with the morning sun on your back and pop your head up and enjoy the scenery – it’s a nice combination.

Good service, guaranteed weather, swimming and fine dining. It was impossible not to like the place – the original Duke back in 1908 would surely have approved.

To see more of our travel writing, please visit: